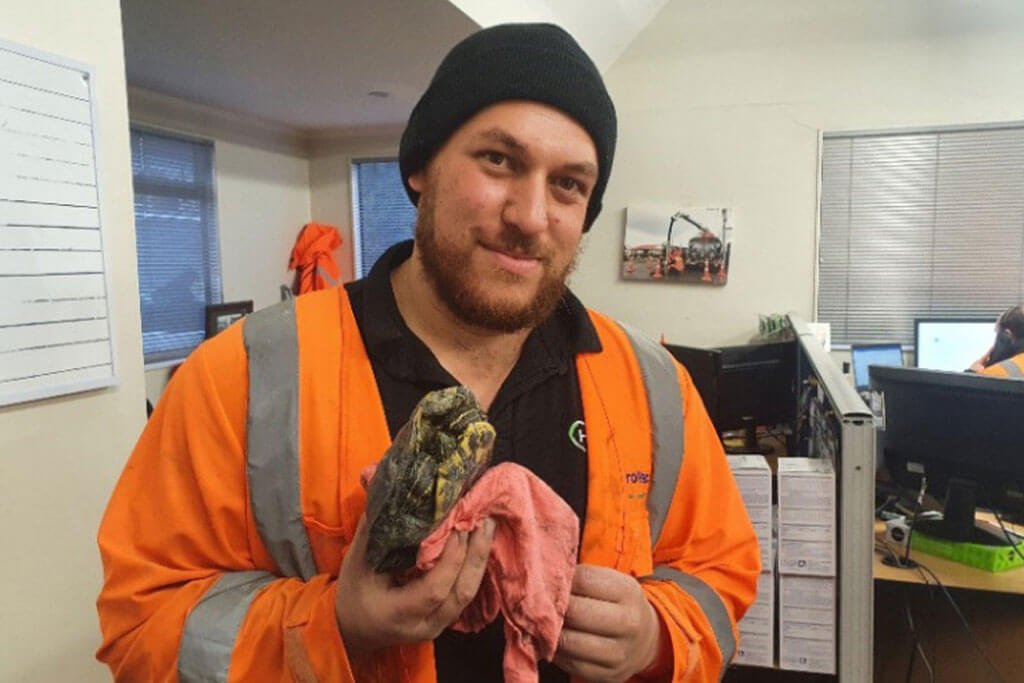 HydroVac’s Tyler Casey was surprised when he stumbled across a sleepy turtle while undertaking stormwater work at the SH1 Wilks Road South Pond. We come across all kinds of interesting things in our line of work, but this was a first!

It seems the red-eared slider turtle had made the motorway pond its happy home. Aware that it wasn’t the safest choice of abode, Tyler recovered the turtle and promptly contacted his manager Mike Dargaville who notified ASM Stormwater Asset Manager Peter Mitchell. The question on everyone’s lips: “What do we do with it?!”

The red-eared slider turtle (Trachemys scripta elegans) is the most common freshwater turtle in the world. Native to the eastern United States and northern Mexico, it is also regarded by the International Union for Conservation of Nature (IUCN) to be one of the world’s 100 most invasive species.

Red-eared sliders take their name from a distinctive red stripe behind each eye, and their ability to slide quickly slide off rocks and logs into the water. These turtles are easy to keep and can be hand fed. However, with a lifespan of up to 50 years, families who once bought a cute pet for children have found, decades later, they are stuck with a fully grown turtle the size of a dinner plate. Not surprisingly, some have been releasing them into Auckland’s waterways.

People think they are doing what is in the best interest of the animal by releasing these turtles into the wild, but it is not in the interest of the wider ecosystem. Red-eared sliders are opportunist omnivores when it comes to food, and a threat to our native fish, zooplankton, molluscs, crustacean, insects, frogs, plants, and birds.

New Zealand banned the importation of red-eared sliders in 1965, but it is legal to own the reptiles. In the Auckland Region these turtles have ‘sustained control’ status and it is illegal to breed, release, or sell red-eared sliders. In Waikato you can be fined up to $5000 if caught releasing one of the turtles.

Following a night splashing around in the Mitchell family bath, the motorway turtle has now found a safe and secure new home in the sanctuary of the Kumeu Country Bears Nature Childcare, where it now resides in a turtle enclosure with two new turtle friends and plenty of very excited young children.

As published in On Ramp; written by Peter Mitchell.